To compete in any collectible card game player needs to use optimal deck, promising regular rating gains. In this article we would learn on how to predict deck performance, especially in the context of Gwent: The Witcher Card Game Pro Ladder.

The main part of the article is an interactive Google Sheet with a guide for diy analysis. We would follow step-by-step Enslave 6 performance prediction made by Pajabol (Gwent 10.12).

The probability \(W_X\) of a win when queuing with deck X on ladder is a sum of products of matchups winrates and popularity.

The knowledge of \(f_i\) and \(m_{Xi}\) depends on card game in question and provided data. When the knowledge is close to complete, the meta evolves faster towards best performing builds present on ladder.

While popularity comes from people’s beliefs and taste, matchups winrate could be assessed independently. In fact, it is not uncommon that globaly observed matchups %wr are different to real ones, where both players play optimally.

In Gwent: The Witcher Card Game matchup statistics and deck popularities are not directly accessible. The feed for trackers is not provided. The only useful information is faction popularity and performance presented on GwentData or here at Pro Ladder page. To make use of faction popularity, we have to prescribe each deck into a faction.

, where \(\frac{f_i}{F_g}\) is nothing else, but pie slice of the member in the group. For example White Frost may be 90% of Monsters decks and so on.

Global faction popularity on Pro Ladder could be found on GwentData. The tricky part is resolving popularity with respect to MMR range. On GwentData one could use various datasets for this purpose; Top100 if high at fMMR, Top2500 if low.

Popularity and global winrate information could not be converted into faction vs faction matchups data. Factional matchups table contains 21 variables, while winrates + popularity are 10.

Neither would it be very useful in this particular case, as we are interested in a single deck matchups; possibly a new deck and a metabreaker candidate, for which matchup data is obviosuly to be estimated ourselves.

The flow charts from ‘How To Analyze Matchups In Gwent ?’ article may come in handy for matchup assessment process.

Deck analyzed in the sheet. The format of this and other deck entries is: 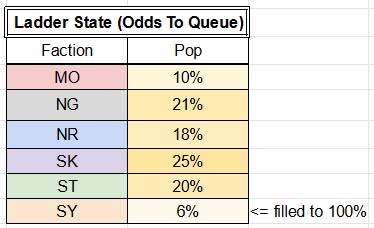 Syndicate popularity is autofilled to 100%. 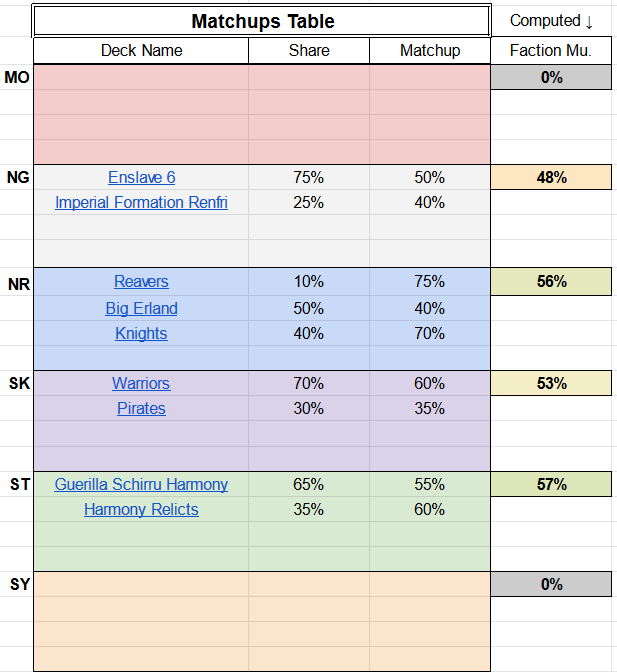 The heart of the tool. Put in the most popular decks at your MMR range. You don’t have to fill factions with low popularity and importance, like Monsters and Syndicate in the picture above. The sheet is designed in a way that dropping factions still leads to reasonable results – feel free to do it.

9 decks were chosen (late December Season 2022). According to Pajabol, Priestess are possible addition to the sheet, as there are some players running them at high MMRs. Other than this, deck choice represents high ladder state pretty well. The rest of the work: filling ‘Share’ (% of deck in faction) and ‘Matchup’ (winrate vs deck) was done by Paja and I’ll go through his reasoning below.

Enslave 6 matchup is obviously a mirror. As analyzed version is pretty standard, the matchup evaluation is 50%. Imperial Formation Renfri is unfavored for Enslave 6, but not terrible. Locks do great job vs engines like Helge or Scorpions. IF has stronger and more stable Round 1, so that dirty tricks like Coup into Triss: Meteor Shower are rarely possible without last say; also red abuse is a risk. More frequent chance of finding value is copying Ramon with Artaud into Sergeant kept in hand.

Vs Reavers Enslave does their job but better with Assimilate engines. Similarily against Knights. Also Torres comes in handy, offering big reach when Knights push R2. Vilgefortz with Torres in R3 could be used as double tall punish if needed. ‘Big Erland’ is the worst matchup out of all NR species, as NG lacks tools to interact with this massive finisher and straightforward strategy.

SK matchups are also a bit polarized – one is slightly favored, one is unfavored. Against Warriors, Enslave has many dirty tricks in arsenal. Especially copying Tyr/Fucusya is a threat given that graveyard was well developed in the earlier rounds.

Against Pirates on the other hand Enslave lacks good copy targets, but main disadvantage is lack of round control – Pirates just force gameplay scenario comfortable for them.

Enslave is most happy to meet Scoia’tael on ladder. Both Guerilla Schirru and Relicts versions lack board control tools, which makes ambitious engines like Scorpions, Helge and Torturers find exceptional value. 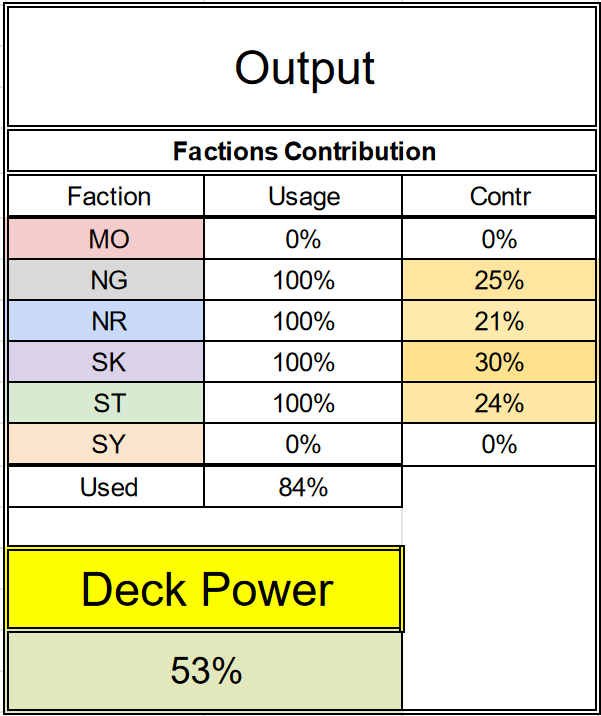 Finally Deck Power is the result we wanted to see from the start. In the case of Enslave 6, expected winrate on ladder is 53%. A normal value for Tier 2 meta deck. The rest has to be done by player’s skill. Or to be more precise (as matchup estimates assumed perfect play from both sides) by opponents misplays 😉

Hope you enjoyed the read. Frankly, Gwent Pro Players, including me, are usually too lazy to do systematical analysis of this type. Nevertheless I’d try to make use of this tool in the following first competitive season of Gwent Masters 5 and invite you to do the same just once to learn something about the math structure behind successful ladder play. Also many thanks to Gwent Masters champion Pajabol for helping me to make the guide example as real as possible for high ladder. 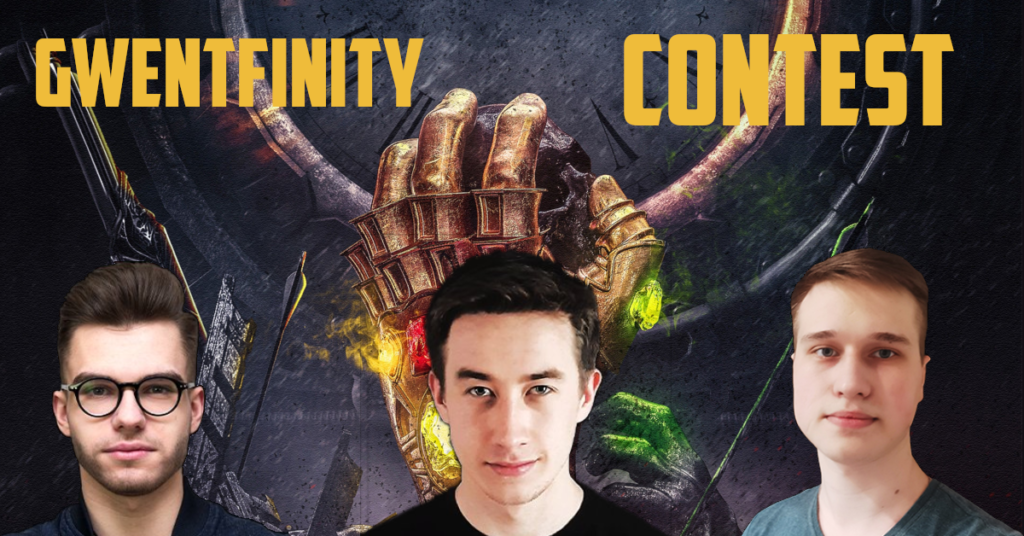 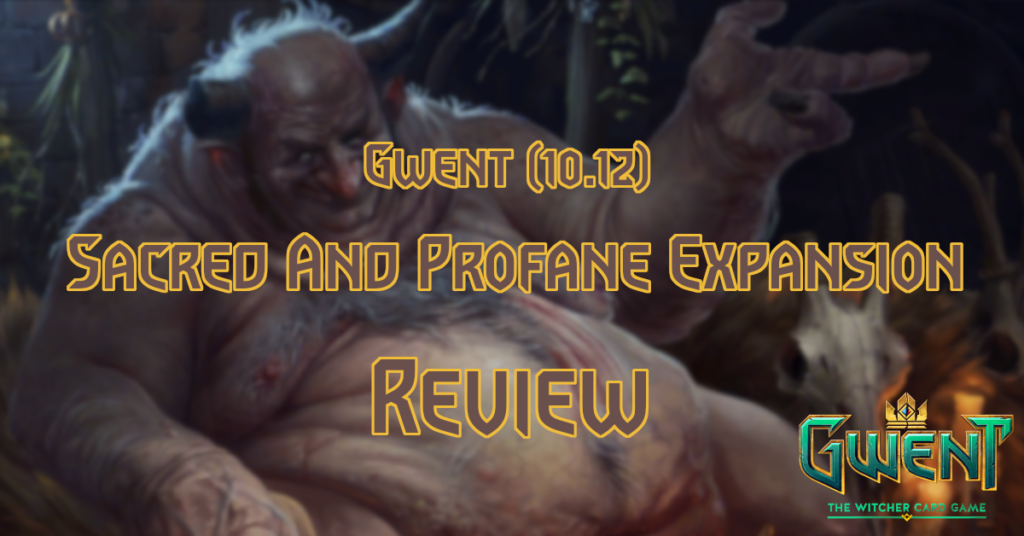 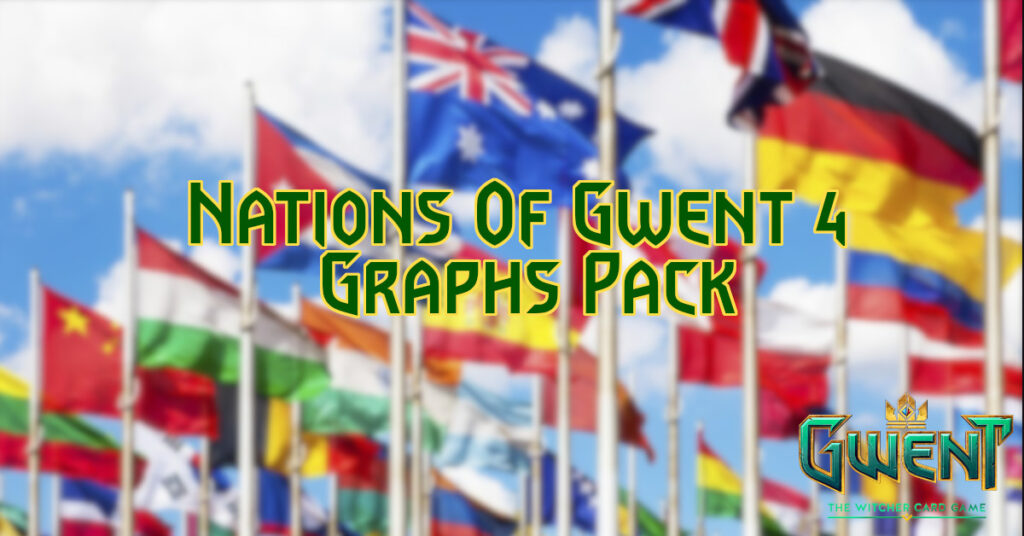